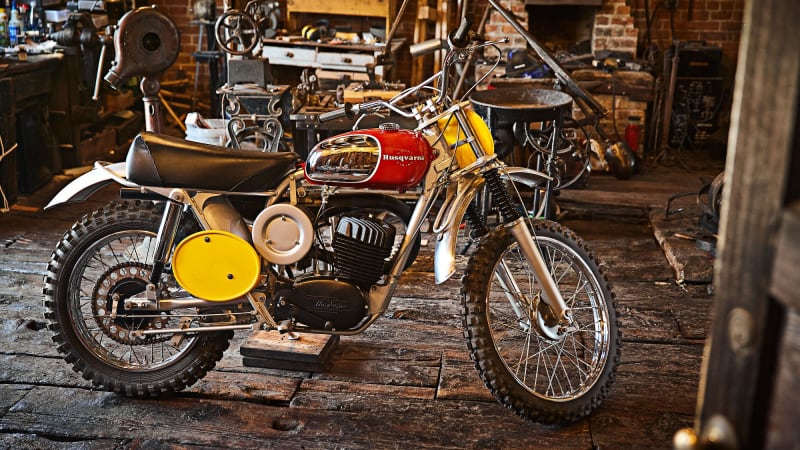 Monterey Car Week is back for 2021, starting Aug. 6, and with it comes an array of sales organized by the nation’s leading auction house. RM Sotheby’s catalog includes the usual multimillion-dollar offerings, like a 1929 Duesenberg Model J and a 1968 Porsche 911 R. But a stunningly diverse selection of two-, three-, and four-wheeled oddities will also cross the block.

One of the more unusual-for-Sotheby’s two-wheelers is a 1970 Solex 3800, which was one of the most popular mopeds sold in France. Power comes from a 49-cubic-centimeter two-stroke single-cylinder, which is par for the course in the world of classic mopeds, but the engine drives the front wheel. It must be manually lowered onto the tire, which it spins via a simple roller system. Millions of Solex mopeds were built during a decades-long production run, a handful were even distributed in the United States, and they’re generally worth a few hundred bucks in running condition and much less if they’ve been beached in a barn for decades — guess how we know. The one headed to Monterey is listed with a dizzying pre-auction estimate of $40,000 to $50,000. Why? Because it starred with Steve McQueen in the 1971 film “Le Mans.”

Another two-wheeler linked to Hollywood is a 1968 Husqvarna Viking 360 that McQueen’s production company purchased from motocross rider Bengt Åberg. It’s expected to fetch between $80,000 and $100,000. Alternatively, there’s a 1970 Triumph TR120 also owned by McQueen’s company and estimated to sell for between $40,000 and $50,000. Both bikes were recently treated to a full restoration, and they’re listed in running condition.

If you want three wheels, there’s an off-beat trio waiting for your bids. First, a 1956 Messerschmitt KR200 Cabriolet, which was a relatively successful bubble car that blended sedan-like protection from the elements with the running costs of a scooter. It could sell for up to $60,000. Older but no less fascinating is a 1910 AC Sociable, which has two front wheels controlled via a tiller and a single rear wheel spun by a one-cylinder, five-horsepower engine via a chain. It will sell for between $30,000 and $40,000, according to RM. Finally, collectors will get the chance to own a running and driving replica of the 1886 Benz Patent-Motorwagen, which is widely considered the first car built.

Moving on to cars with four wheels, there’s something for everyone in the 2021 catalog, assuming your pockets are deep enough. In addition to several race cars, the roster includes the one-off 1954 Dodge Firearrow II concept that’s oozing with Jet Age styling cues and a 1994 Bugatti EB110 Super Sport with about 6,300 miles. Both have a connection to Italy: The Firearrow II was designed by Ghia and the EB110 was manufactured near Modena.

Off-roaders are increasingly being featured in big-name auctions. RM’s includes a 1981 Toyota FJ45 Land Cruiser delivered new in Bogota, Colombia, and fitted with an Old Man Emu suspension system as well as a 1994 Mercedes-Benz 290GD pickup imported to the United States in 2020. Alternatively, if you’ve got a living room in need of decoration, or a pre-war Alfa Romeo in need of an engine, a straight-eight from a 1932 8C 2300 Monza wearing chassis number 2111037 will cross the block. It would fit neatly in the back of the 290GD.

The full catalog can be viewed on RM Sotheby’s official website. The three-day sale runs from August 12 to 14.

How to Decorate the Living Room Walls?