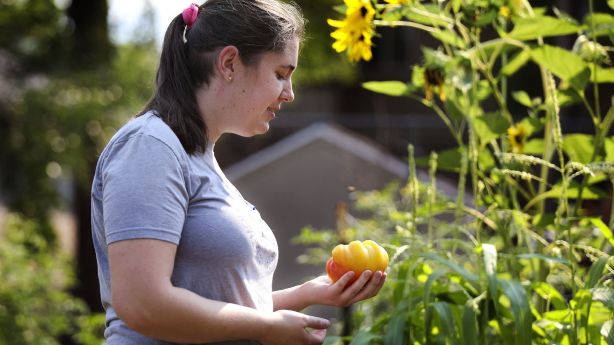 Gardener Bailey Roberts admires one of her tomatoes from her plot in a new community garden at Richmond Park in Salt Lake City on Wednesday. (Laura Seitz, Deseret News)

SALT LAKE CITY — A growing community is home to a new gardening space.

The Wasatch Community Garden, located at 444 E. 600 South in Richmond Park, in the Central City neighborhood, has been more than a year in the making, after it was set to open last spring. The COVID-19 pandemic, however, halted group activities, though the initial gardeners were able to plant their first crops.

“It’s really a space for growing community, and it’s in a park that has community baked into its namesake. It’s not just a place where kids come to come together, but we have wonderful historic roots of this community here at Richmond Park,” Salt Lake City Mayor Erin Mendenhall said.

She thanked members of the city’s Parks and Public Lands Division, whom she said have put their hearts “in every brick and every piece of decomposed granite, and I think every tomato and potato that’s growing behind me today.”

“This is so exciting for me, I’m a council member, but in my real life, for my day-to-day job, I own two food businesses,” City Councilwoman Ana Valdemoros said. “And I started my business at a farmer’s market. … And when I started, I saw an opportunity to share a little bit of my culture with Salt Lake City by making empanadas.”

Valdemoros said she has witnessed the downtown farmer’s market “grow and grow and grow.” The area of the city where the new community garden was established has the highest demand for garden plots, she said.

“Richmond Park is located in one of the denser neighborhoods in the Central City planning area. It’s characterized by single family, multifamily housing units, where obviously they don’t have private, open space,” Valdemoros noted.

She said the garden will provide “inspiration” and opportunity for those with entrepreneurial spirits in the neighborhood.

Mendenhall noted that the garden’s later-than-expected official opening means it now showcases “full and fruiting plants” rather than small bulbs.

While 33 of the plots are already in use, a few spots remain available, she said. Gardeners each get 32 square feet of space with water included, as well as guidance from other gardeners. Anyone who passes by the community garden can harvest plants from plots situated outside of the fence.

“So take a sunflower home to your sweetheart and maybe take a tomato home for your lunch,” Mendenhall said.

Wasatch Community Gardens Director Ashley Patterson said that the garden being installed in the spring of 2020 “in the grips of the pandemic, when much of the world was shut down, I think was a tribute to the power of these spaces.”

“People had to have this space, and they made it happen,” Patterson said.

She noted that the woman whom the park is named for, Mignon Barker Richmond — the first African American to graduate from a college in Utah — helped start the first school lunch program for schools.

“I think she believed in the power of healthy food to change community,” Patterson said.

The garden was created through a partnership between the city and Wasatch Community Gardens, which have worked together to develop sustainable gardens on city-owned land with access to water lines. This latest garden is the sixth created by the partnership.

“Community gardens support our local food system and create connections that build stronger communities. Utilizing portions of our open spaces to grow food also helps make our city more climate adaptive and resilient,” Mendenhall said in a statement. “This ongoing collaboration has resulted in a deeper relationship between the city and this important community partner.”

Residents interested in renting a plot can contact Wasatch Community Gardens at 801-359-2658; or by email, at [email protected]