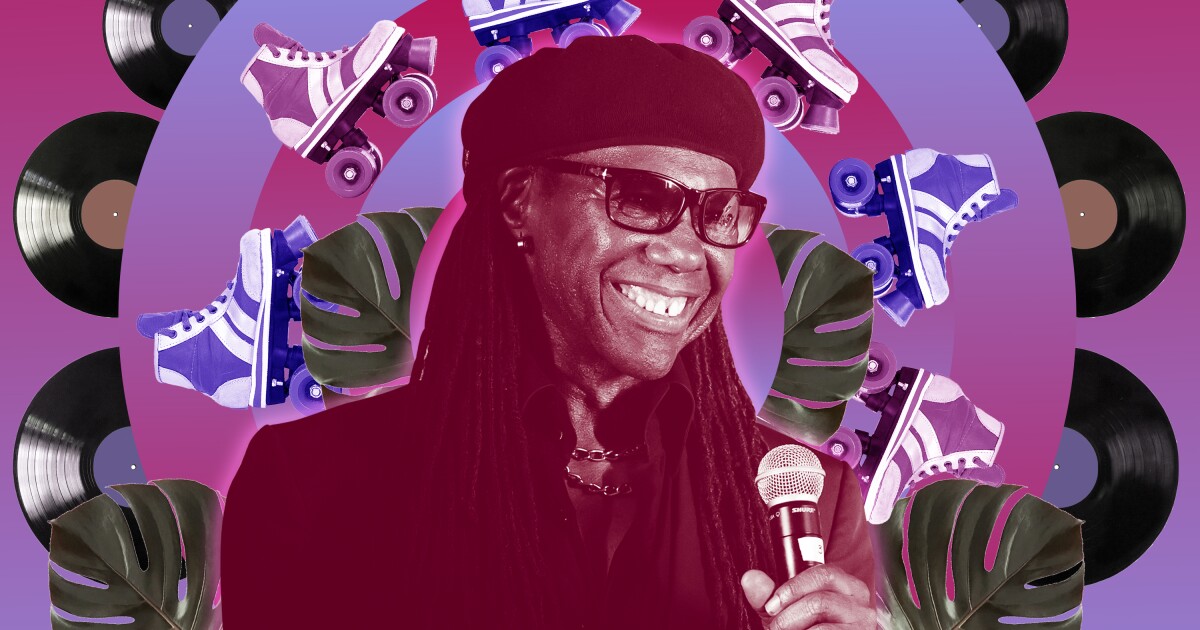 There’s a wormhole to 1979 just a short trip down the coast from LAX. Step inside and discover a hypnotic world of disco, glitter and roller skating where “music flows and magic grows.” Here, L.A.’s coolest lewks come out; everyone boogies. Music up, inhibitions down. At least for tonight. Tomorrow, the botany heaven, the rink, the dance floor at the South Coast Botanic Garden will simply be a memory of a groove.

The DiscOasis is a pop-up roller-skating experience like no other. The second you step onto the grounds of the Palos Verdes Estates garden, the energy of the party envelops you, echoing throughout the space, which includes palm trees that jut from the center of a roller rink, blinged out in more neon and mirrored signage.

“It really feels like an oasis,” says Marty LaSalle, co-head of Constellation Immersive, creator of the pop-up.

The DiscOasis is not the easiest to classify; it falls somewhere between music festival and theme park, but with more neon and a ’70s-themed vibe. The brainchild of Constellation Immersive and Rock & Roll Hall of Fame musician Nile Rodgers, the DiscOasis explores the intersection of plants and roller skating — two of L.A.’s most beloved cultural pastimes.

A pop-up party is born

The DiscOasis grew from a commitment to creating something immersive and outdoors for the sake of COVID-19 safety. Music was a must. “Music is very pure-spirited, and it’s about joy, and it’s about bringing people together and it was something that we thought the world needed a lot of right now,” LaSalle says.

They weren’t looking for a concert. But they saw an opportunity in disco. They approached Rodgers, secured South Coast Botanic Garden and got to work.

The wheels began gliding across the rink in July. But roller skating is just one piece of the puzzle: Wheels aren’t necessary to enjoy the atmosphere. There’s also delicious food. And “Groovemaster” Nile Rodgers hand-selects the musical rotation.

“I provide crates of records, like the old-school ones. And the various DJs will sort through my crates,” which hold about 300 records each, Rodgers says. “So by the time you finish, the DJs will have dozens of crates for hundreds and hundreds of songs.”

The DiscOasis concept brings Rodgers back to his OG disco days when his music and touring career was just taking off.

Back then he was a self-proclaimed “jazz snob.” The first time he went to a disco with his then-girlfriend — a waitress at a jazz club — he heard Donna Summer‘s “Love to Love You Baby” and was taken by surprise. “I saw all these disparate people getting together and having the time of their lives, and nobody was putting anybody down; everybody was dancing together,” Rodgers remembers. “And it wasn’t a Black club, it wasn’t a gay club, it wasn’t a Latin club, it wasn’t an Asian club. It was everybody. And that music and that feeling is something I’ve always wanted to be a part of, which is why I made my career in dance music.”

Rodgers is perhaps best known for his decades-long sound that moves between funk, dance and rock. He made some of his greatest hits with his band Chic (“Good Times”) but he also wrote and produced iconic tracks for other artists, including Sister Sledge (“We Are Family”), Diana Ross (“I’m Coming Out”) and Daft Punk (“Get Lucky”). He also made what might be the most iconic entrance music in movie history — “The King’s Motorcade” — on the soundtrack for “Coming to America” (1988). (The Eddie Murphy blockbuster became a new blueprint for Black creative achievement.)

Now, Rodgers is guiding the groove of another rich Black tradition: skating.

“One of the things that Nile Rodgers continues to remind us is that in a disco the music never stops,” says LaSalle. “Clubs, sometimes the music will stop and somebody talks about something, but disco never does.”

Throughout its run, many have come to the DiscOasis to feel that disco energy.

“It’s been amazing,” Rodgers says. “The vibe is incredible. And it’s probably gone beyond what I thought.”

A self-proclaimed “plant person,” Rodgers is particularly fond of the greenery. (Gardening “changed my life,” he says.) But what excites him most about the DiscOasis is the diversity, “especially when I see people that are of all ages and all backgrounds.”

Some come for the incredible candid photo ops; others come for the tacos, pizza and vegan ice cream or the people-watching. No matter what brought them out, the DiscOasis draws you in, pulls you toward the floor.

“I don’t know if I’m gonna hit the rink tonight because I’ve been skating every day and I think tonight I have to see all my friends,” Rodgers says, “but I did bring my skates just in case someone coaxes me.”

The DiscOasis opened in July and runs through Aug. 29, at South Coast Botanic Garden in Palos Verdes Estates. Timed tickets start at $49, with VIP upgrades and $29 options for early-bird skating available. Guests must sign a waiver to skate.