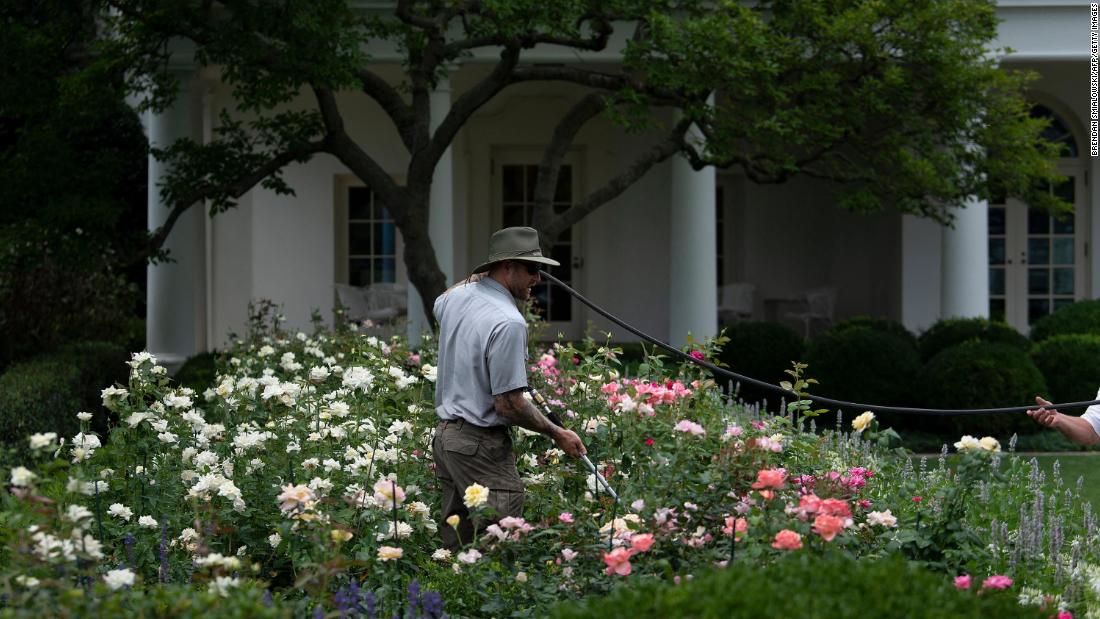 Beschloss on August 7 tweeted his ongoing disgust at what he dubbed the “evisceration” by Trump of the most iconic garden in America. As with most things touched by the Trumps, the Rose Garden has become a political lightning rod. Its massive 2020 renovation, a project overseen by the former first lady, was polarizing to a degree normally reserved for complex policy matters, not posies and sod.
The reconstruction meant removing almost all of the garden’s plants and trees and flowers, digging up an antiquated irrigation system and installing a new one, creating a more cohesive audio/visual apparatus, laying pavers for walkways and replanting just about every shrub and seedling from scratch. At the unveiling, one year ago this month, reviews split mostly down party lines, between those who felt the update was a tribute to Trump’s glamorous aesthetic, and those who were certain the first lady had taken shears to the garden’s bounty to make woodchips for potpourri.

Beschloss would fall under the latter category.

For the last year, the famous historian has tweeted with consistency his deep distaste for the Rose Garden renovation, earning thousands of retweets each time he posts his takes, which are often accompanied by photographs documenting the garden in past glory. Last Saturday, Beschloss tweeted a photo of the historic, yet barren, patch of land just outside the doors of the Oval Office with the caption: “Evisceration of White House Rose Garden was completed a year ago this month, and here was the grim result — decades of American history made to disappear.”

CNN reached out to Beschloss for comment on this story and did not receive a response.

The following day, Trump — or, rather, the Twitter account belonging to the Office of Melania Trump — posted its own photo of a more recent, florally vibrant Rose Garden, and a caption firing back at Beschloss.

“@BeschlossDC has proven his ignorance by showing a picture of the Rose Garden in its infancy. The Rose Garden is graced with a healthy & colorful blossoming of roses. His misleading information is dishonorable & he should never be trusted as a professional historian,” the tweet stated.

A spokesperson for Trump doubled down on the tweet, telling CNN, “The American people deserve honesty.”

The spokesperson added that Trump’s approach to the garden redesign was done after much research on its history, “combined with the needs for the present. Politicizing this renovation further illustrates the media’s bias against Mrs. Trump.”

Trump was justified in pointing out that the photo Beschloss tweeted isn’t exactly representative of how the garden looks now, nor how gardens work, according to a person familiar with the Rose Garden’s renovation.

“The first year it’s sleeping, the second year it’s creeping, and the third year it’s leaping. Everyone knows that adage,” the person told CNN of the tempered expectation process, which those in the gardening world know to be true.

This person, who like three other people interviewed for this story, requested anonymity in order to discuss Washington’s most controversial plot of greenspace.

“There is no way with the work that was done it could be — ‘ta-da! Here you go!’,” said this person. “The entire garden had to be ripped out to be rebuilt.”

Another person involved in the planning of the renovation acknowledged the “after” was “shocking” and that the garden looked “neutered.”

However, the necessity of the overhaul was agreed upon by multiple parties, chiefly the White House groundskeepers and then-White House chief usher Timothy Harleth, as well as Trump. Decades of wear and tear and constant replacement of trees, bushes and plantings to maintain a bountiful exterior had done irreversible damage, according to a 200-plus page report commissioned by the Committee for the Preservation of the White House.

Two of the people involved in the redesign said when the Rose Garden renovation began, there were just 11 actual rose bushes — now there are more than 200.

“There was so much blight and disease and turnover of plantings that what Beschloss and everyone else thinks was the original garden that was ‘destroyed’ by Melania [Trump], hadn’t been the original garden in literally decades,” said this person, who worked closely with the National Park Service on the Rose Garden project.

Essentially, as irrigation issues, shade and root growth tangled and killed many of the plants, the National Park Service — whose workers tend the White House grounds — would simply dig up the dead stuff and in its place plant vibrant, colorful, often seasonal flowers and bushes and, occasionally, trees. “It was a constant bait and switch,” said the source.

The 10 Bunny Mellon-era crabapple trees — that Beschloss and others have angrily decried were removed in the 2020 renovation — had actually been replaced multiple times since 1962 — there was nothing original about them.

“By the early 2000s, they were just huge. Too big for the space,” said a White House senior staffer who is familiar with the removal of the trees. They were replaced with smaller ones, at least twice before last year.

In 2019, for the Australia State Dinner that was held outside in the Rose Garden, new crabapple trees were brought in, says this person, adding, “No one was the wiser.”

But the crabapples that have over the years disappeared weren’t destined for the woodchipper, although “about three” have died, says the White House staff member, who could confirm the trees’ whereabouts — though only on deep background. A “couple” others are being rehabbed and regrown in the White House greenhouse, and “some” have been replanted on the South Lawn grounds, says this person.

However, there are still some who say Beschloss had a point in his critique.

Like many who fancy a crowd-pleasing abundance of tulips or seasonal perennials to showcase America’s most historically fabled garden, the historian appears to miss and desire the immediate gratification of a garden that always looks beautiful, and abundant — faux or not. And the Rose Garden did look eviscerated in its initial unveiling, a shell of what it was in its original — or even the most recent — form.

There was also a deadline to hit, one of the people involved with renovation acknowledges.

“[Melania Trump] was giving her speech for the [Republican National] convention from the Rose Garden right after the unveiling,” this person said.

That said, even the roses that were planted for the unveiling and her speech aren’t among the bushes flowering several feet high now, one year later.

“It’s basically impossible for roses like that to survive the heat and humidity of a Washington, DC., August,” says the source, who notes that as temperatures dropped, appropriate rose varietals were added — and a large portion of those plants are now thriving.