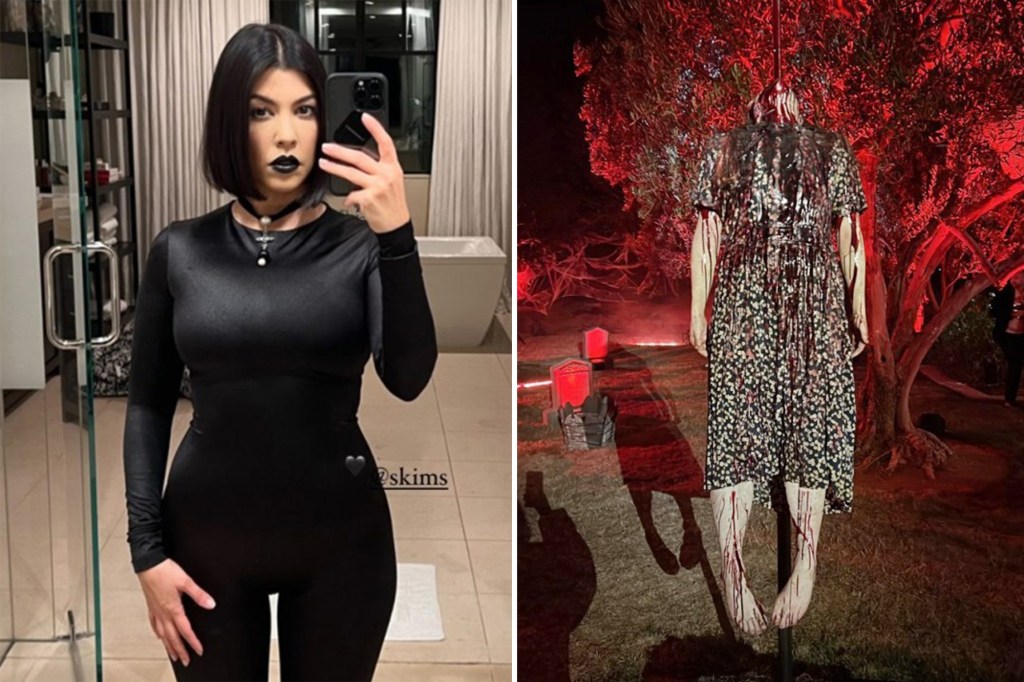 This seems a bit extreme — even for the Kardashians.

The spine-tingling tableau, partly inspired by the new spook film “Halloween Ends” — which she projected on a large screen in her backyard while an actor costumed as the movie’s knife-wielding killer, Michael Myers, menacingly roamed her estate — offended social media whistleblowers, who blasted the “Kardashians” star for going overboard with the gore.

“As much as I love horror and scary things, this is a bit too realistic & violent for absolutely no reason… gives me bad vibes,” penned a digital detractor.

“I love Halloween and I try to be understanding of other people’s point of view but it is so gross to use something like murdered women as a prop,” another scolded.

“I feel like this is highly inappropriate even for adults,” said another.

Critics on Reddit called out Kourtney for designing her freaky fete after “Halloween Ends,” which is distributed by NBCUniversal, a parent company of Hulu — where her family’s new reality series is exclusively streamed.

“Everything they do is an ad,” a skeptic of the Kardashians spat. “That’s how they keep their money. Their trips are funded too. When Kim promotes a movie she is being paid to promote it.”

Elsewhere online, fans of the ultrafamous clan weighed in with their thoughts on how each celebrity sister celebrated the ghoulish holiday.

“Is it just me or is this the most normal/’kid-ish’ party I’ve seen the Kardashians throw?” one fan cheered if the daytime jamboree. “Like slime and sweets and cute balloons in the backyard seem like a reasonable party for children.”

“I love how Koko is the fun auntie. She always has the best kids parties,” another applauded.

Billionaire sister Kim Kardashian, 42, kicked off her spooky season by baking a batch of cupcakes with her oldest daughter, North West, 9, who took credit for doing the lion’s share of the work in the kitchen.

“We made some Halloween cupcakes,” Kim bragged in a social media post, showcasing the sweet treats covered in green frosting, faux vermin and dirt-like cookie crumbles.

But before the Skims creator had the chance to describe their delectables, a precocious North cheekily corrected her mother, saying: “I did! Not you! You helped me mix it.”

To which North conceded, “You…Well I decorated them.”

Their cute exchange notwithstanding, internet instigators were unimpressed by Kim’s underwhelming mommy-and-me activity.

Some even questioned whether the mom-and-daughter duo actually bake the sweets together.

“The hilarious thing is that Kim probably paid a designer tens of thousands of dollars to artfully plop a load of [treats] down,” said a cynic.

She and gal pal Hailey Bieber, 25, painted their bodies green to resemble Elphaba from the musical “Wicked” and hit the town in a limo for a bite.

“My friends took me to go get pizza!” exclaimed Jenner in a video clip of the fun.

“Why is everyone staring at us?”

Bieber sarcastically replied, “I know, I feel like we’re dressed so normally. So it makes no sense, ya know?”

The ever-trending K’s are known for sporting over-the-top Halloween costumes every Oct. 31.

Last year, Kim wowed as a sexy metallic cowgirl, Kourtney and Travis dressed as the stars of the film “Edward Scissorhands” and a then-pregnant Jenner disguised herself as a feisty black cat.

Transitional-style kitchens and experts on to style one