Inside a Ghost Kitchen Where 60 Restaurants Make Delivery-Only Meals 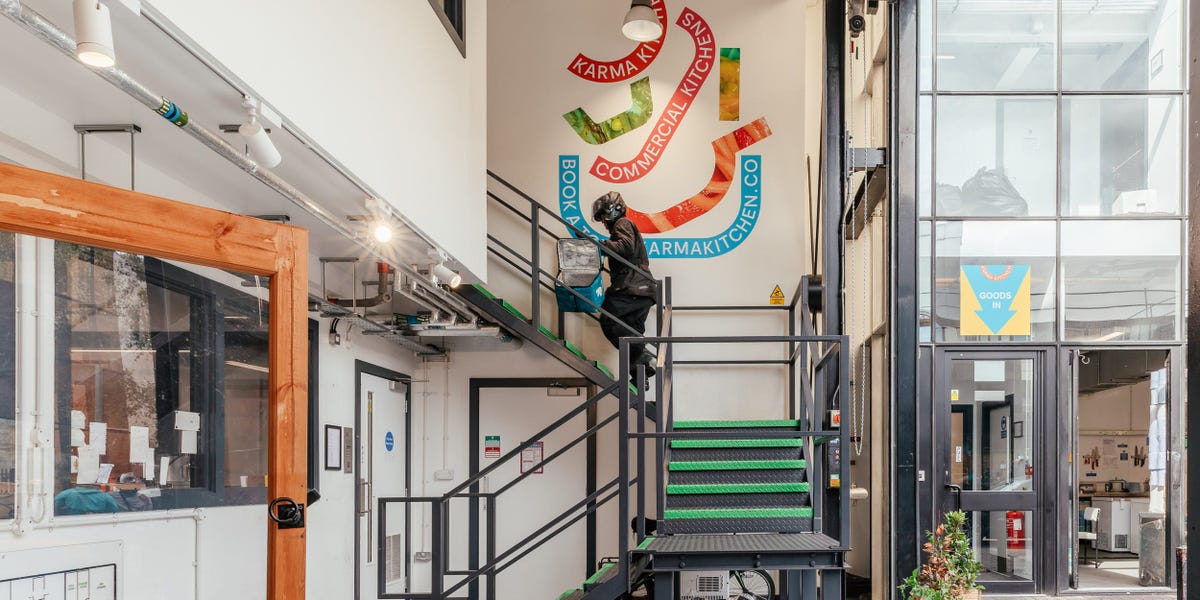 Uber Eats
and Deliveroo riders are chatting outside Karma Kitchen, waiting to be buzzed in to collect their orders. This is what it’s like at a so-called “ghost” or “dark” kitchen, where chefs prepare restaurant-quality food to go.

Ghost kitchens – rentable, delivery-only kitchens – became a phenomenon during the pandemic as restaurants were forced to close their dining areas. However, they’ve remained popular even as restaurants began to welcome customers back indoors, and investors are pumping money into them.

Wendy’s recently announced plans to open 700 ghost kitchens in the US by 2025. Former Uber CEO Travis Kalanick’s $5 billion startup CloudKitchen now has operations in 29 US cities. Karma Kitchen, a UK startup that was founded in 2017, raised $314 million in a series A fundraise last year.

The 15,000-square-foot site is on two floors. All the walkways and railings are painted electric green, and the walls are tiled in baby pink.

On the ground floor are two “anchor” kitchens, the largest food preparation spaces in the building. They tend to be rented out by big restaurants for use as central production units – sites that make ingredients in batches to be shipped to restaurant locations.

The ground floor also has smaller kitchens that are being used by bakers and small restaurants.

All kitchens look out onto a central porter unit. This is where kitchen porters work 24/7 washing dirty pans and other equipment. Chefs load dirty equipment onto trolleys and wheel them over to the unit.

The porter unit is self-contained and has large glass windows on each side. The top half of its walls and its roof are decorated with a vinyl wrap featuring food photography by Maisie Cousins.

The upper floor has a gangway that looks down onto the porter unit and links the upstairs kitchens. Natural light from skylights floods the building.

All the interior walls at Karma Kitchen have large glass windows. Gini Newton, who cofounded Karma Kitchen with her sister Eccie who is a chef, said that this was so anyone working a late shift could make eye contact with someone from another kitchen, and feel less isolated.

On the upper floor are two shared kitchens, each with eight work stations.

Hot ‘N’ Juicy Shrimp, which is known for its seafood boils, uses one work station as well as a private kitchen at Karma’s other site in Hackney, north London.

Samantha Pascal, cofounder of Hot ‘N’ Juicy Shrimp, said of the shared kitchen: “You can banter with other people working in the kitchen and still feel you have your own space.”

Everyone working in the shared kitchen must be either level two or three certified under the UK’s food-safety system, so cleanliness is “never an issue,” Pascal said.

She said that when “everyone’s Deliveroo devices are going off … it motivates you to work faster as well.”

As well as the anchor kitchens and shared kitchens, there are 17 private kitchens of varying size throughout the building that can be rented out individually.

The private kitchens have standard appliances and have the capacity for businesses to bring in any specialized equipment they require.

Gini Newton said Karma mainly hosted central production units when it opened, but is now increasingly a space for restaurants and chefs who are starting their own delivery services.

The sisters started Karma Kitchens after their catering business nearly failed when it had to move three times in a year.

“We wanted to build a kitchen that could help food businesses grow at every stage, from startups to well-established chains,” Gini Newton said.

Karma Kitchen is set to open a third site — its second in Hackney — in September. In November, it plans to open another site in the city’s Camden borough, and in April, it plans to launch its first site south of the Thames River in Bermondsey, which is planned to be even larger than the Wood Green site.

Pascal said that she hopes to open kitchens in the new Karma sites. “Gini knows, wherever they go, we’re going,” she said.

5 Best Things To Try To Decorate Your Wall

35 locker decorations to shop for teens at Target, Amazon and PBTeen