In Brazil, a House That Frames Its Landscape Like a Camera 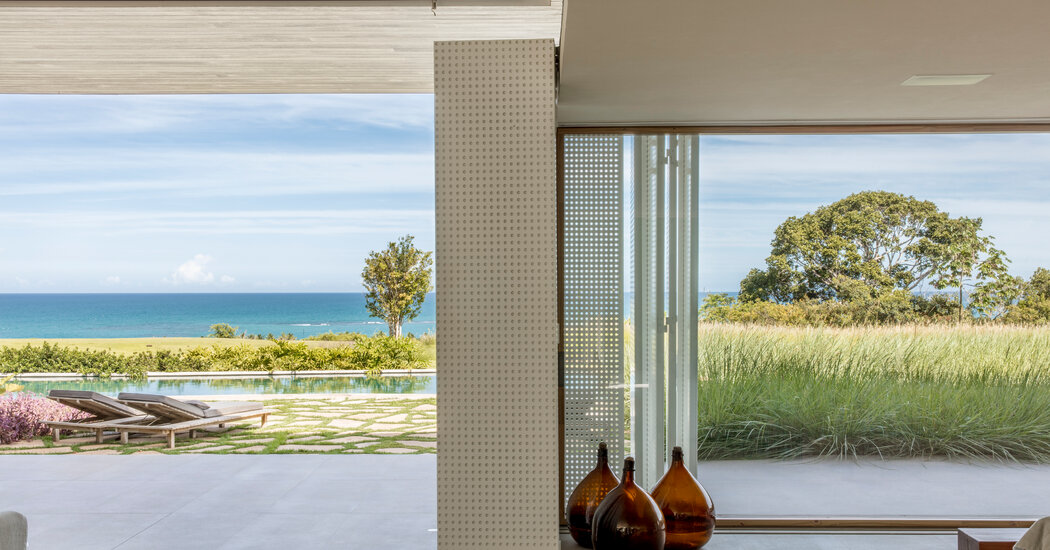 MARCIO KOGAN HAD been practicing architecture for a little over a decade when he decided to shut down his São Paulo, Brazil, firm for half a year to make his first full-length film. It was 1987, and he’d already completed 13 shorts, but creating a feature required choosing between what he then considered his two parallel callings.

The movie, “Fire & Passion” (1988), a comedy about a group of acquaintances wandering through an unnamed city, was “a disaster in every way,” he says now. “I lost everything in making that film, but I learned a lot about architecture: about proportion, the movement of light, the play of artificial and natural light.” Tall and trim with curly gray hair and a rumbling laugh, Kogan, 69, certainly seems the part of an affable director, presiding over a table of his colleagues and collaborators on the back patio of the offices for his 40-person Studio MK27, located in the wealthy São Paulo neighborhood of Jardim Paulista. “After that, I had no doubt that I should focus completely on architecture.”

Whether projecting over white-sand beaches outside Rio de Janeiro or hunkered down in his hometown’s dense urban landscape, the houses Kogan designs are always cinematic, defined by their dramatic approaches and horizontal volumes; by setlike interiors, overseen by his 61-year-old colleague Diana Radomysler, that are somehow both plush and spare; and by a direct connection with the nature beyond them — like the viewfinder on a wide-angle camera, Kogan’s houses often take aim at the landscape.

But in Casa Vista — a four-bedroom weekend home completed in 2019 for a couple from São Paulo and their three adult children — Kogan and his colleagues Samanta Cafardo, 46, and Beatriz Meyer, 44, along with the landscape architect Isabel Duprat, 66, built not just a camera but a house of screens where every surface refracts and reflects light. Set on a windy bluff outside the chic Bahian beach town of Trancoso, Casa Vista is built not just for views, but from them.

THE HOUSE BEGINS with a glimpse of a long, shingled gable, around 20 feet high, peaking over a tropical canopy: a pale gray roof of a traditional fisherman’s cottage extended nearly 200 feet. A flagstone path winds between native araçá, aroeira and cainito trees and beds planted with Mexican shrimp plants, their pink heads dotted with tiny white flowers. Around the path’s first curve, the roofline disappears from sight, replaced by vertical slats of ashy eucalyptus — reminiscent of a traditional material in northeastern Brazil made from the spindly branches of the biriba tree — which seem to grow straight down over the facade like petrified roots. Round another bend and the garden reveals not a house but a tableau: a 39-by-11-foot opening that frames a distant strip of the Atlantic and the emerald lawn before it.

When the 9,074-square-foot project began in 2014, the clients — Sergio Moraes Abreu, 63, a businessman, and his wife, Vivian Leite, 57, a graphic designer — asked for “a small cabana,” Leite says, where their family could gather for holidays. She and her husband first visited the coastal fishing village in 1986, when it was still a discreet beach destination popular with transplants from São Paulo. When this 2.6-acre piece of land became available (the couple also bought two adjacent plots to ensure privacy), it proved irresistible.

The couple had worked with Kogan’s firm on their 2012 home in São Paulo, called Casa Cubo, a concrete prism lifted over a skirt of glass and aluminum and surrounded on all sides by another of Duprat’s sensuous tropical gardens. Hidden from the road in the leafy residential neighborhood of Jardim Paulistano, that house took the rectangular form of São Paulo’s omnipresent concrete towers and compressed it. Casa Vista, by contrast, takes the elemental shape of a Trancoso cottage — a box topped with a triangular roof — and explodes it. In the blueprint’s first iteration, Kogan and his colleague Renata Furlanetto, 46, broke the house into eight separate villas arranged around a riverlike pool. The proposed building, Furlanetto says, was also a village of sorts, modeled on Trancoso’s Quadrado, or central square, with its open esplanade and colorful adobe cottages. But the dream of the home, Leite says, was to make a place “where we could all be together, not separated in our rooms,” so they scrapped the original plans and asked Kogan to bring the whole project under one roof.

Built from steel beams heavy enough to withstand the strong sea winds that blow up the 65-foot-high escarpment on which it sits, the house has an outer structure that levitates 14.6 inches off the ground and frames an immense void, 151 feet long and 11 feet high, with bookends of biriba at either side. Walls of Viroc (a dense wood-and-cement composite) collapse in on themselves like folding screens, creating a house within a house. A veranda overlooking the gardens on either side loops around the interior space, an open-air hallway that connects three bedrooms, a small den, a bathroom and a living room. The rectangular blocks of biriba at each end appear to support the weight of the roof — there are, in fact, hidden concrete columns throughout the house — but also contain a kitchen on one side and the couple’s suite on the other.

“The engineer was afraid when we showed him the plans,” Kogan says. “It’s not complicated, but it’s audacious.” Approaching from the road outside, it’s easy to overlook the ambitious building, which hides behind heliconias, colocasias, araçás and erythrinas, making itself visible only in pieces. The first vignette you encounter upon entering the property is a 1,862-square-foot outdoor living and dining room centered around a collection of midcentury furnishings, chosen from antiques stores around São Paulo and reupholstered in sun-bleached shades of taupe and beige. For Leite, whose main home and office are crowded with brightly colored works of art and objects collected on her travels, the idea of a house decorated in such washed-out tones was unappealing at first, but Radomysler, who designed the interiors alongside Pedro Ribeiro, insisted: “I didn’t want to introduce strong colors inside because nature was doing that for us.”

In lieu of color, the house becomes a study in texture. In the indoor living room, a near facsimile of the al fresco one, 10 pendant lamps woven from a dark natural fiber called piaçava hang over a 16-foot dining table carved from a length of pequiá wood. Distressed sand-hued linen covers a pair of deep sofas designed in 2009 by Diesel for Moroso; the Dutch hotelier and former Diesel creative director Wilbert Das, who lives in Trancoso, is a friend. Brushed basalt floors, warmed by the constant sunshine, are soft as talc underfoot.

All of these muted surfaces double as screens for the play of light that lends the house its drama. Circular apertures perforate the Viroc walls, pixelating the view and transforming the flamboyant landscape into a pointillist canvas; it’s the inverse of trompe l’oeil, with natural beauty manipulated to look like painting. Around noon, when the sun is high, the Viroc’s matte white surface reflects the greens and blues of the surrounding garden and distant ocean. In the evening, the low light projects dramatic silhouettes of philodendrons onto the folding walls like shadow puppets.

THESE PLAYFUL FLOURISHES also hint at the house’s third-act reveal. Stepping through the open living room brings you into Duprat’s back garden, the only point from which the entire structure comes into view, its long, monolithic form suddenly as sturdy and uncompromising as a warehouse. To soften the rigidity of the building and level out the plot, which initially sloped toward the edge of the property, where it dropped steeply into the greenery, Duprat shaped the lawn with curved concrete tiers, etched into the grass like the lines of a topographical map. Strong winds made it impossible to sustain the kind of lush vegetation that grows on the house’s other side, so she chose instead to plant undulant beds of Dallis grass and crimson fountain grass — more reminiscent of the Hamptons than a typical Bahian garden — that mirror the house’s somber palette of grays in a scale of moss and sage. “Instead of fighting with the environment,” Duprat says, she chose plants that would “give life to the wind,” their constantly rippling surface “a homage to the sea.”

The garden, planned with the structure itself, is the house’s resolution. From the far edge of the garden, the structure becomes a fishing cottage again: a wooden box topped with a shingled triangle framed by sky and grass. The house, so porous from within, transforms into a windowless mass. No longer a screen, it’s now a soundstage, hermetic and self-contained, so that its residents may create their own private memories within its rooms. “When I design a project, I like to think that I’m a character inhabiting that space,” Kogan says. “It’s such a pleasure to imagine other lives.”

Eclectic Design Made This Bryn Mawr Home Into an Unorthodox Oasis