A Home That Retreats Into the Brazilian Savanna 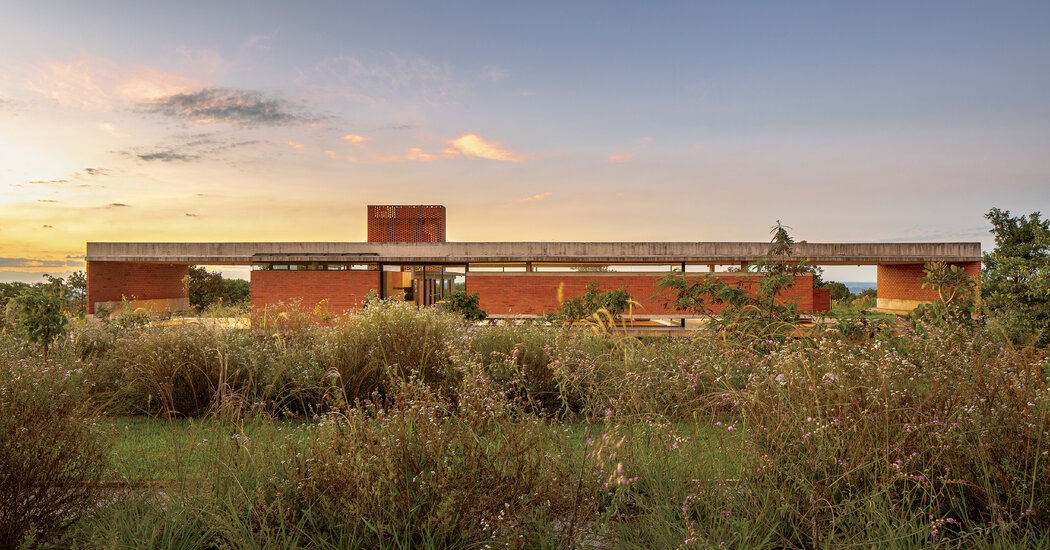 AS A CHILD in the young city of Brasília, a futuristic capital conjured out of Brazil’s vast interior savannas in the late ’50s, Ilka Teodoro, now 43, would spend weekends on her grandfather’s farm 25 miles northeast of the city. The farm was on a 48-acre property dominated by the low shrubs and contorted trees native to the country’s second-largest biome, the Cerrado, which covers more than 772,000 square miles, nearly a quarter of Brazil. Now the center of a protected ecological area called Águas Emendadas, her family’s plot included rows of fruiting plants and a foundry for adobe bricks. Around them was wilderness, a dry, slow-growing landscape dominated by grasses, brush and gnarled flowering trees that few people — Brazilians included — associate with a country known for its rainforests and beaches.

Teodoro and her husband, Andre Venancio, 45, who runs a real estate company, both grew up under the Cerrado’s infinite sky. The dream of a Brazilian interior capital dates back to the colonial period, but wasn’t realized until the election of President Juscelino Kubitschek, who had campaigned on an audacious promise to bring “50 years [of progress] in five.” The resultant 8.8-square-mile city center, or Plano Piloto, laid out in 1957 by the urbanist and architect Lúcio Costa, is shaped like an airplane, with a monumental core and two curved residential wings. Developed into the ’60s, Brasília’s iconic Oscar Niemeyer-designed institutional structures — the white dome and its inverted twin marking the two houses of the National Congress; the slender, marble-clad columns that lift the Supreme Court off the ground — resemble clouds more than buildings. Designed around vehicular, rather than pedestrian, traffic, Brasília represented an apotheosis for modernist urban planning. For its earliest inhabitants, particularly those who relocated from Rio de Janeiro, residing in Brasília was like living in Costa and Niemeyer’s dream — but not for Teodoro, the administrator of the Plano Piloto, a position analogous to mayor. “Walking through these spaces, passing these monuments every day, [felt] completely natural,” she says. Part of the second generation born in Brasília, Teodoro and her husband were among the first people to truly see the city as home.

So when she and Venancio decided in 2014 to build a weekend house on five acres of former pastureland outside Sobradinho, one of the 33 so-called administrative regions inhabited by the Federal District’s three million residents, they knew, she says, “that we wanted it connected to the Cerrado and to Brasília, to the architecture of the city and its landscape.”

TO BUILD THEIR CERRADO HOUSE, the couple commissioned Bloco Arquitetos, a Brasília-based firm founded in 2008 by Henrique Coutinho, 47, Matheus Seco, 46, and Daniel Mangabeira, 47, who met as architecture students at the University of Brasília. In the last decade, Bloco has made a name for itself designing restaurants, shops and private houses in the surrounding suburbs, the latter mostly composed of luminous white volumes raised against the blue scrim of the sky: geometric voids inspired by contemporary Portuguese architects like Álvaro Siza and Manuel Aires Mateus. According to Seco, whose family moved from Rio to Brasília when he was a child, the name of their firm references that shared aesthetic: In Portuguese, “a bloco can mean a concrete or ceramic brick — a basic element of construction,” he says, but in Brasília, the word “bloco” also refers to the residential buildings that form the city’s lived space, in contrast to Niemeyer’s ethereal monuments.

The early Bloco houses borrowed Niemeyer’s stylistic purity — bold white shapes in relief against the sky — and reflected a city that tended to overlook the Cerrado, the world’s most biodiverse tropical savanna, only 55 percent of which remains intact. “It’s disappearing [in part] because hardly anyone understands its aesthetics or ecology,” says the 39-year-old landscape architect Mariana Siqueira, who has regularly collaborated with Bloco in the years since she and her colleague Amalia Robredo were hired to design Teodoro and Venancio’s garden. (The Cerrado is also increasingly being threatened by agribusiness.) For the project — named the Vila Rica House, after the gated community in which it was built — she and the architects wanted to create something that would pay homage to Brasília and the native countryside from which it was born, trading out fields of white plaster for low-slung pavilions made from pockmarked concrete beams and partitions of red brick that run parallel to the ground. In the rainy summer months, the house contrasts against the moss green vegetation; in the dry season, when the terrain bleaches to shades of terra-cotta and dun, the house, Seco says, “becomes part of the landscape,” indistinguishable from the parched savanna around it.

The main structure consists of two horizontal volumes set perpendicular to each other — one containing the public spaces, the other with two bedrooms, an office and four bathrooms — and connected by a short staircase and a concrete canopy, all of which hovers a few inches off the ground, to keep the Cerrado’s snakes and insects at bay. In the larger of the two buildings, a 110-foot-long concrete slab covers the 600 square feet of kitchen, living room and service areas before thrusting out over an 888-square-foot, open-sided patio with a wood-burning stove at its center. Concrete columns, mostly hidden by a long brick partition that shields the indoor space from the dirt road outside, connect the roof to a concrete platform paved in ash-colored Brazilian cinza andorinha granite. The edges of the covered veranda frame the distant plateau, turning the horizon into a gradient that fades on a rainy summer day from emerald green to algal gray.

The Vila Rica House has no single entrance. When guests arrive from central Brasília — Teodoro wanted a house where she could throw parties — they filter in from every side, passing into the modest concrete-and-plywood kitchen, or stepping up onto the veranda from Siqueira’s scruffy garden of macela, foxtail and red grass.

When Siqueira began working on Vila Rica, common wisdom held that Cerrado plants couldn’t be cultivated in a garden. But this project — which inspired Siqueira’s own firm, Jardins de Cerrado, focused on educating locals about their own flora — has disproved that presumption. The staggered rectangular beds that separate the house from the road give form to a fledgling wilderness of amargoso and sunny aldama flowers; the garden, Teodoro says, has brought native wildlife back to what had previously been pastureland choked with exotic grasses planted decades before for grazing horses. Today, the couple often wake to the sound of parakeets and woodpeckers who’ve returned to the property, perched in the pau terra and barbatimão trees.

Throughout the house, the Cerrado itself plays protagonist. The horizontal lines that shape the structures direct your gaze through eight-foot-high windows, past a pool set so low in the ground that it resembles a watering hole. The furniture is unassuming to the point of invisibility — a Bloco-designed kitchen table made from two slabs of concrete; years-old sofas with white cotton slipcovers — and what little art there is was drawn by the couple’s two adolescent children.

While the house’s public spaces are bright and open, the 1,429-square-foot private structure is intimate and warm, cocooned in locally fired red brick and ceilings paneled in auburn cumaru wood. Concrete floors, laced with hairline cracks like the surface of Japanese kannyu pottery, are tinted ocher by locally quarried sand. Running along the base of the west-facing wall, recessed panels of glass — like the gap between the buildings and the ground — make the house feel as weightless as Niemeyer’s iconic cathedral downtown, dedicated in 1970 and shaped like a puff of smoke left behind by a rocket. But while Niemeyer’s buildings launch themselves upward, Vila Rica spreads out, as though expanding to fill the immensity that surrounds it.

Since completing the house in 2017, Bloco has increasingly taken on projects that preserve the colors and textures of the Cerrado. Those buildings, like Siqueira and Robredo’s plantings, turn away from an imported architectural beauty in favor of what was there before: the endless horizon; the earth-hugging grasslands; the chance not only to create something new but to retrieve what was nearly lost. This, more than anything, represents Cerrado architecture — not material, not form, but space, which is another way of saying possibility.

Eclectic Design Made This Bryn Mawr Home Into an Unorthodox Oasis