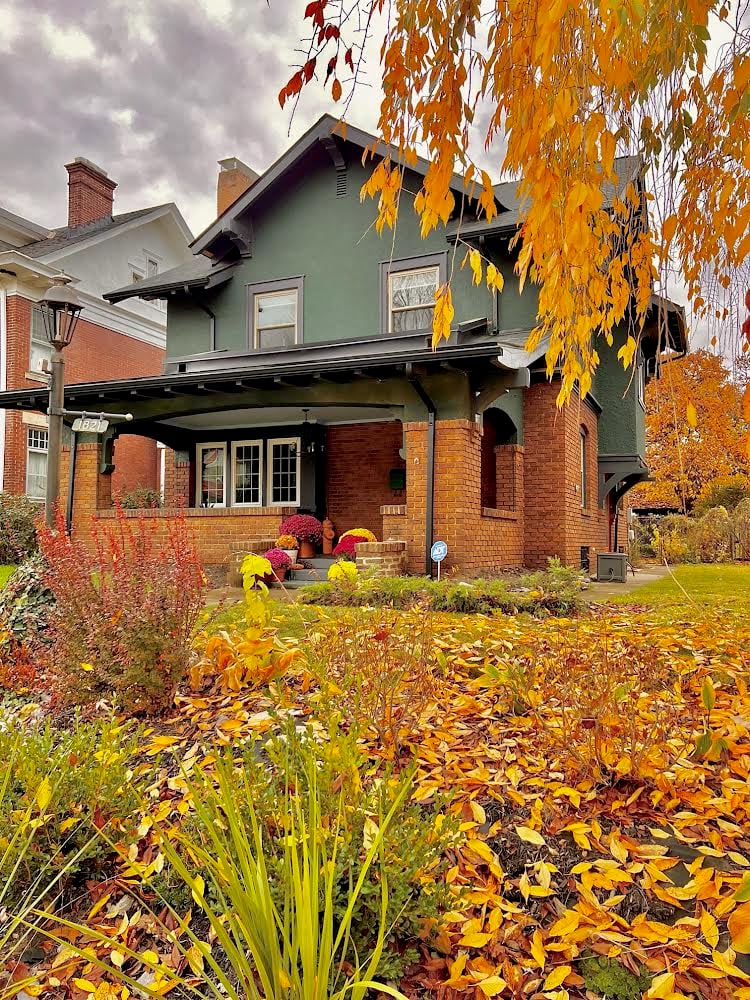 In relationships and real estate, it’s not always love at first sight.

Such was the case for Justin Folk and Mitch Wright when their now-home went on the market. Based on the listing photos, Justin didn’t even want to tour the house. With its then orange-framed porch and overgrown landscaping, the Olde Towne East craftsman didn’t have the curb appeal the couple was looking for.

But, also as in relationships and real estate, once the two got to know the inside of the house, they knew it was meant to be. Bonus, it was in the perfect neighborhood.

“We found ourselves spending so much time driving to the Downtown area for basically everything we did in our spare time, and I’d had my eye on the Olde Town East area for several years,” Justin said.

Along with their two tween daughters, Justin and Mitch moved into the three-bedroom, four-bathroom home in June of 2021.

“As soon as we walked through the front door, we fell in love and it felt like home,” Justin said. “The house had a great combination of old and new and the location and street were perfect.  It had been mostly remodeled but still had some work left to make it our own.”

At just over 2,300 square feet, the house includes a sun porch off the second floor, a third-floor bedroom, and plenty of nooks for Justin, a procurement manager at Designer Brands, and Mitch, an interior designer and realtor, to keep their work-from-home office spaces. The kitchen, with its stunning emerald green cabinets and backsplash, is the perfect gathering place for get-togethers.

Justin describes their style as industrial with a touch of modern. He says, though, they’ve tried to keep in mind the age of the house as they’ve decorated.

“We feel as though we choose finishes and décor that simply feel like they belong in the home,” he added. “It’s a great mix of old and new, rustic and bold.”

Originally built in 1910, it’s the couple’s first older home, as they moved to the neighborhood from a brand-new condo in the Little Turtle area.

“There’s always something that needs fixed,” Justin joked. “But, that’s what happens.”

Some of these fixes have become major upgrades for the home.

“We had a few plumbing issues upon moving in which presented the opportunity to remove the wall between the kitchen and dining room,” Justin said. “It has had a huge impact on the openness and feel of the entire first floor.”

Other projects have included removing large, overgrown trees and bushes that hid the house from the street, replacing the roof, gutters, and downspouts, removing the screens on the front porch, temporarily moving the washer and dryer from the back of the kitchen to the basement (and now to its permanent location on the second floor), replacing the light fixtures and repainting several rooms.

More fixes, the couple says, are to come.

“We first and foremost need to tackle the landscaping,” Justin said. “We would also like to remodel the primary bathroom. And, we’d like to replace the back deck with a stamped concrete patio and replace the chain link fence with a privacy fence. We’ve even tossed around the idea of rebuilding the garage to include a carriage house.”

When asked about their favorite part of the home, the couple had a hard time picking just one thing.

“The front porch is obviously amazing, the kitchen is fun and super unique, and the third floor is bright and cozy,” Justin said.

Honorable mention for favorite, Justin said, would be the neighborhood. The family loves to explore the area, spending time at Franklin Park and the new East Market.

“We call it our little nook of OTE,” he added.

At Home is a monthly column on Columbus Underground focused on urban home remodeling and style as well as older home renovations and unique homes in Columbus. If you would like to have your home featured in the At Home series, please send an email to [email protected].

See inside: A new-build home near Lake Wylie with a custom pantry and closet